How To Tell If Your DPF Is Clogged 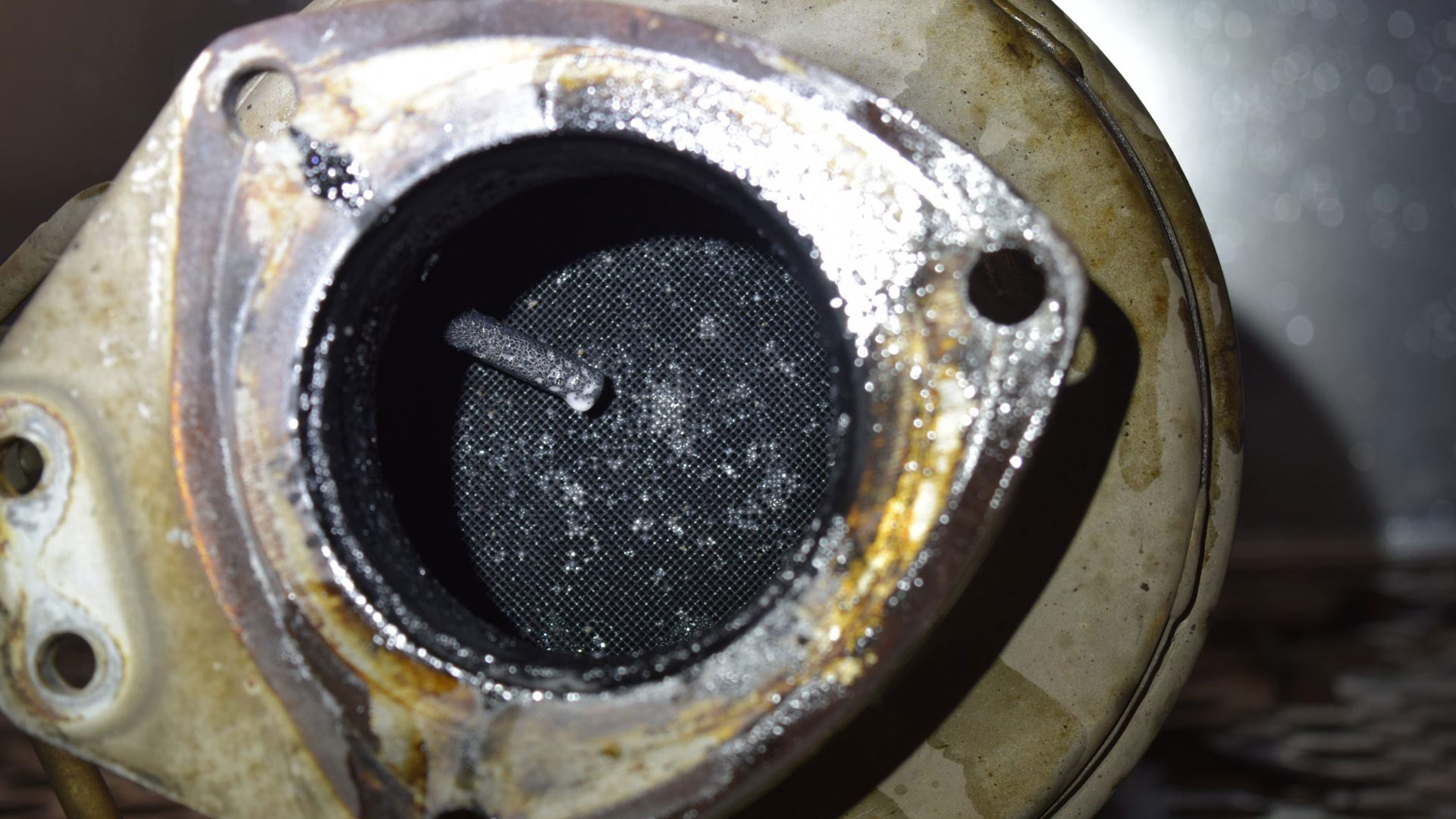 Is your diesel vehicle running abnormally? Are you seeing flashing dashboard lights and rough idling? As reliable as cars are nowadays, they still run into their issues now and again. Diesel Particulate Filters (DPF) are a relatively new technology, only gaining mass popularity in the mid 2000’s here in the UK. As with any relatively new technology it hasn’t been all rosy since their inception. Manufacturers have struggled to balance their fantastic emissions reducing properties with the likelihood of become clogged with soot and other particles emitted from diesel engines.

DPF issues don’t always mean the end of your journey but, at the very at least, are likely to severely affect your vehicles running, possibly using more fuel and/ or losing performance. If a DPF clog is ignored and begins to worsen it can cause lasting damage, not only to the filter itself but also other engine components as airflow through the exhaust becomes severely restricted and affects the engine’s ability to breathe.

Symptoms of a Blocked DPF

The most obvious and arguably most panicking of all indicators of a fault DPF is a dashboard warning light. It’s never a nice feeling when your car’s display begins to resemble a Christmas tree, particularly when a symbol illuminates that you don’t recognise. For information, owners manuals will show what each of the warning lights represents.

Modern vehicles are outfitted with bunches of sensors that monitor all the parameters concerning the engine and the efficient running of your car. When one or multiple sensors detect a faulty reading, they will report to the car’s computer, if the right conditions are not being met you will be presented with the aforementioned DPF warning symbol.

Luckily having the symbol illuminate is a sure-fire way to tell if you are having DPF issues as the car has already figured out the issue for you, eliminating the fault-finding stage and allowing you to perform the maintenance or book your vehicle into a specialist garage.

Reserved for only the worst cases of DPF blockage, a limp-home mode is often the vehicles computers last line of defence to prevent further damage and allow you to travel short distances safely. You will know when your car goes into this mode as performance will drastically decrease, often limiting you to a certain speed or revs, while a dashboard light or warning message is also not uncommon.

Limp-home mode usually activates if the DPF blockages are reaching levels which, if allowed to continue building, could be dangerous to major mechanical components. This safety net will stop further damage occurring, with the car often being held in this state until the problems have been fixed. Having the mode removed will, in some cases, require an authorised dealer to reset systems in order to restore normal running once again. The best way to avoid reaching this is to look out for the less obvious symptoms below.

Often one of the first indicators that a vehicle is not running optimally will be an increase in fuel usage. Engines that are not running efficiently will often over fuel, to prevent damage occurring and in DPF-equipped vehicles, as an attempt to raise exhaust temperatures and allow the DPF to clear blockages.

An engine that is running with too much fuel is safer than one that is not getting enough, making it the default state reverted to by all manufacturers, to increase vehicle longevity, particularly when problems arise.

Simply keeping an eye on your average fuel consumption through the cars fuel computer should be enough, an obvious drop when performing similar driving is often a sign that there could be blockages building within your DPF.

Often a symptom that goes hand-in-hand with poor fuel economy, is a decrease in engine performance. As you would expect from a motor not running at it’s best, your engine will not be able to muster up the same performance, likely giving a noticeable decrease in acceleration. This often shows when you suddenly require more throttle input to maintain speed (particularly noticeable on hills and motorways).

Performance is often decreased as a result of the engine over fuelling, this is not optimum for any engine but is often a safer state when DPF’s are building up blockages. The restricted airflow of the exhaust can also cause a decrease in performance as the engine cannot breathe properly and expel exhaust gasses.

Unfortunately, a symptom of many engine-related issues, but difficulty starting (particularly on cold days) is another common side effect of DPF clogging. Restrictions in the exhaust system make it more difficult for the engine to turn over and start, an issue that will only be compounded with a very cold engine (such as in winter), as this is naturally more difficult to get started in the first place.

Having trouble getting your car started when you’ve got an important schedule to keep is not only annoying but can also be costly. A lot of basic vehicle recovery service packages do not include home start assistance, meaning you could be left stranded unless you fix the problem yourself or fork out for a vehicle recovery.

Our last symptom associated with poor running, rough idling commonly occurs alongside reduced fuel economy and decreased engine performance. Poor idling is not to be confused with a cold start, whereby most engines will maintain higher revs upon initial start to warm vital components. Instead rough idling is noticeable when the car is warm but sat stationary or coasting in a neutral gear. It’s easy to notice as the hand on the rev counter will be moving up and down without any throttle input, in some instances getting low enough that the car will shake or vibrate as the engine attempts to stall.

Rough and uneven idling is a result of the engine not running correctly, it could be over fuelling, restricted airflow or the engine constantly adjusting due to poor sensor readings. All of these can be caused by DPF blockages, making it one of the most common causes of engine idling issues.

Black smoke is not uncommon in many diesel vehicles from years gone by, but is something that is rarely seen in modern examples. This means that any diesel vehicle equipped with a DPF should not be producing large clouds of black smoke, this can signal that the particulate filter is not functioning correctly.

The smoke will be most obvious when accelerating, keep an eye on your rear-view mirror (if safe to do so) when performing hard acceleration to check for yourself. Another option would be to have a passenger look out the rear window or a helper standing on the roadside, who can check for copious clouds emitting from the cars exhaust pipe.

Black smoke is often accompanied by one of the aforementioned symptoms such as reduced fuel economy and rough idling, a combination of any of these is often a good indicator that the DPF requires attention.

What to do When Your DPF is Blocked

While DPF blockages may not stop you from driving, they are a sign that your vehicle is not running healthily and should be rectified as soon as possible. Continuing driving as you have previously will only exasperate the problem, making the eventual solution a more expensive and lengthy process.

Most will take their vehicle directly to their dealer or trusted independent specialist to get the DPF cleared at once. While this is an easy way of getting the problems solved, it can also lead to you being without your vehicle for a while as well as costing you a pretty penny.

Alternatively, you could attempt to resolve the problems yourself at home. This could not only save you some money, but also enables the fix to work around your schedule. Fixing your vehicle at home has the added benefit of not having to hand over your keys and be without a car when you need it. Most methods for home resolution can be performed without specialist equipment or tools, though you should always make sure to perform any work safely and consult experts where required.

DPF blockages, big or small can be a real pain. Identifying some of the symptoms from above could enable you to address the issue before it can cause you some real heartache. A combination of rough idling, poor performance and reduced fuel economy is a sure-fire sign that your engine isn’t running as the manufacturer intended. A DPF warning light meanwhile, is the easiest way to tell that your filter has become blocked and may soon cause issues.

We would recommend that you take all the possible steps to avoid DPF issues occurring but also assure you not to panic should you spot any aforementioned symptoms. Simply address the issues as soon as possible, taking your time to research the best solution for you and your car, to get you back on the road and have your vehicle running perfectly once again.

Czok is the trading name of Czok Holdings Limited.

https://www.czokbrand.com is a participant in the Amazon Services LLC Associates Program, an affiliate advertising program designed to provide a means for sites to earn advertising fees by advertising and linking to amazon.co.uk